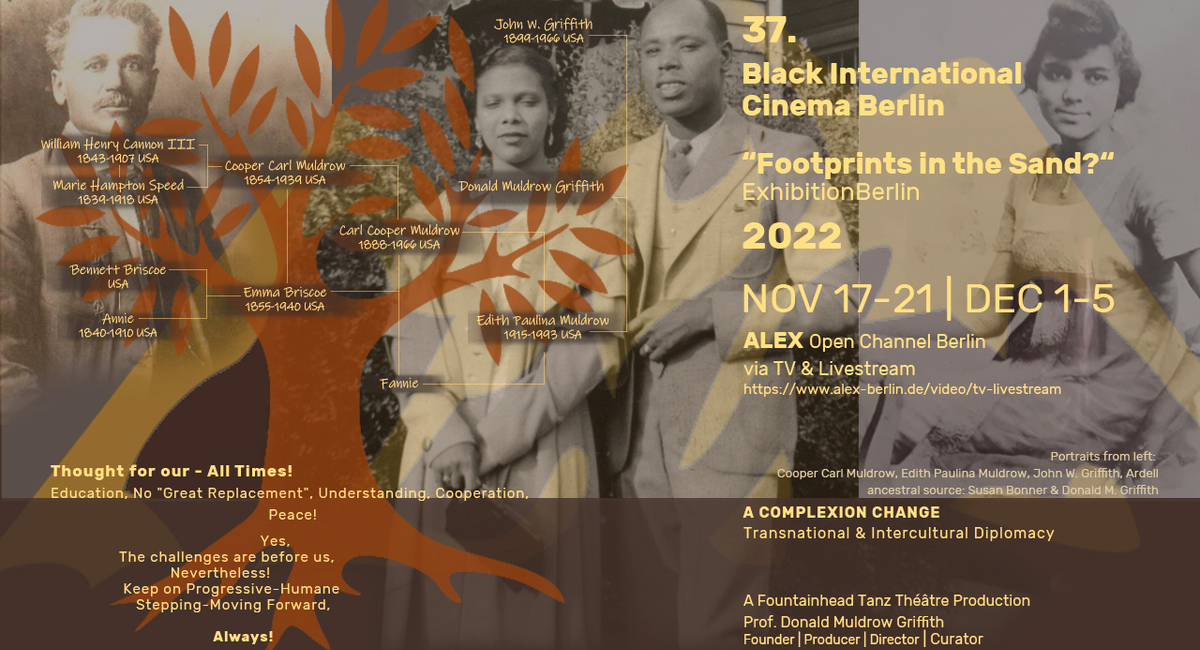 The challenges are before us,

Since its founding in 1980 in West Berlin, Fountainhead® Tanz Théâtre has been working for increasing understanding, cooperation and respect in a society in transition towards more diversity – A Complexion Change.

"On and On and On…" is the motto of the 37th edition of Black International Cinema Berlin 2022, presented by Fountainhead® Tanz Théâtre in association with THE COLLEGIUM – Forum & Television Program Berlin, "Footprints in the Sand?" ExhibitionBerlin and Cultural Zephyr e.V., on television and via livestream from Nov. 17-21 and Dec. 1-5 in cooperation with ALEX – Offener Kanal Berlin (Open Channel Berlin) and as part of CrossKultur 2022.

The festival will focus on film contributions by independent, local and international filmmakers with diverse cultural backgrounds and perspectives with the intention of promoting intercultural dialogue through transnational diplomacy. "Onward and Upward, Despite All, Always!"

Since then, Fountainhead® Tanz Théâtre produces and directs the Black International Cinema Berlin each year in Berlin and additionally, in other European and US-American cities.
The festival focuses on presenting works of an artistic, cultural or political nature coinciding with the general educational, social, artistic and economic interest of people from Africa, the African Diaspora and people with an interest in participating in intercultural communication and the resultant interfacing and sharing of educational, social, artistic and economic resources.

Furthermore, Black International Cinema Berlin is open to ALL filmmakers and contributes to better understanding and increasing cooperation between people from various cultural, ethnic, national and religious backgrounds, in order to reduce prejudices and support a peaceful and respectful living together in our multi-faceted society.