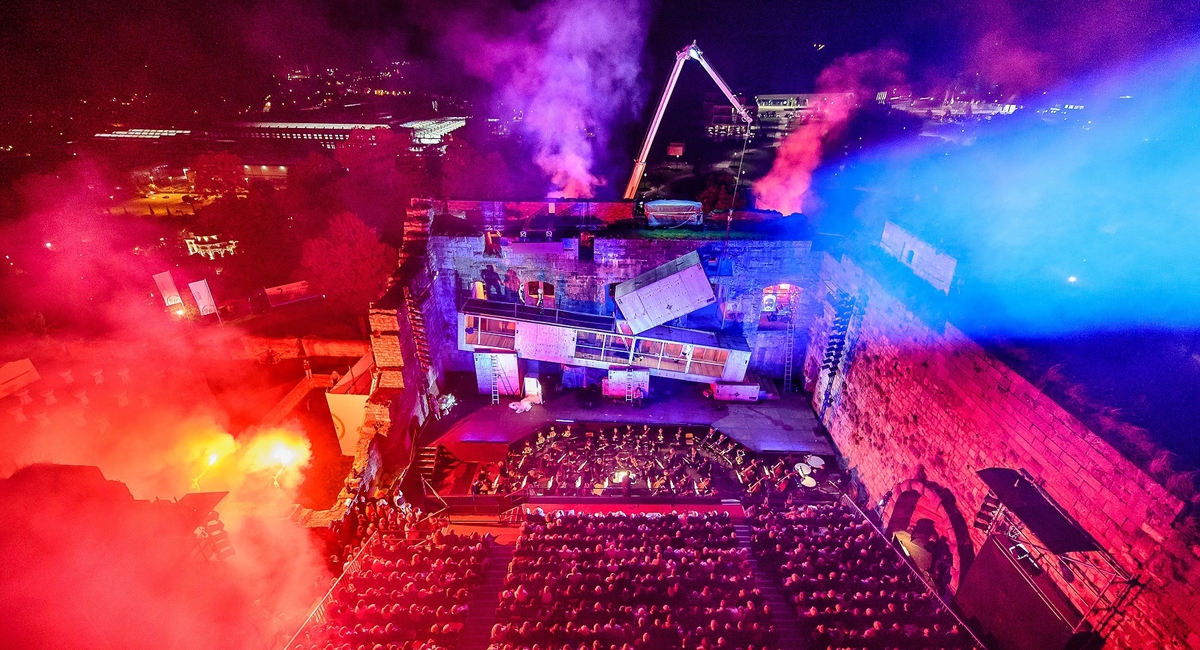 Hellenstein Castle: You can see it from afar and long before you pass the sign of the town of Heidenheim an der Brenz in southern Germany. The medieval Staufer castle, which is situated 74 meters high above the city and almost has been destroyed by fire in the 16th century, looks like a bastion from the outside. Inside though, seen from the courtyard, the restored ruin boasts a picturesque and impressive view that attracts many tourists throughout the year – and even more music lovers in the summer: The Hellenstein Castle hosts the Opernfestspiele Heidenheim since five decades and a half, thus ranking amongst the five longest-running and most traditional opera festivals in Germany. Close to 20,000 visitors are heading here each summer to experience opera performances and concerts on a "Weltklasse" (world class, quote by the Opernwelt magazine) level in the former Knight's Hall of the castle, "one of Europe's most beautiful open-air music stages" (Die WELT) and other select venues in the region.

One of those venues is the Festspielhaus Congress Centrum Heidenheim, opened in 2009 and meeting the latest acoustic standards. The hall was built in order to create more weather independence and an additional festival location, and offers the opportunity to host a second set of props in case of rain, a stage of identical size to the Knight´s Hall, and even some extra seats compared to the open air venue. Both stages are within walking distance on Heidenheim's Schlossberg hill - we believe this to be a unique situation for an opera festival in the world.

It is above all the well thought-out artistic programme and the constant flow of new ideas that, on the basis of the financial security provided by sponsors and state subsidies, are decisive for the success of the festival. Three opera productions and a series of orchestral concerts form the programmatic core of the festival. In addition to other concerts, extras such as "OH! An der Quelle" and the "Schlossbergtafel" combine culinary delights, conviviality and music. "Contemporaries", which focus on young composers and new music, as well as a jazz concert series, are also part of the programme. In 2016, Opernfestspiele Heidenheim and Cappella Aquileia (the festival orchestra, see below) have launched a new series with the performance of Giuseppe Verdi's early operas in the order of their creation. Both performances and live recordings (for broadcast and CD) have gained international praise and have strengthened the brand “Opernfestspiele Heidenheim” far beyond local and national borders. After "Oberto Conte di San Bonifacio", “Un Giorno di Regno”, “I Lombardi” (and, in the same year 2018, “Nabucco”) and “Ernani”, in 2020 the first Venice-based opera of Verdi will be scheduled: “I Due Foscari”. The "Junge Oper", which has been inspiring children and young people with music theatre since 2006, also promotes young opera singers. The format is highly successful: Around 4,500 visitors every year attend the Junge Oper productions alone. The educational programmes of the Opera Festival and the Cappella Aquileia orchestra are constantly evolving and are being supported by national and local funds. In September 2019, the Junge Oper production “Gluecksschmiede” (“Happiness Forge”) was awarded the “MIXED UP” prize of the All-German culture education society.

Marcus Bosch, festival director and chief conductor of the Opernfestspiele, has created an additional corporate identity brand with the founding of his own orchestra based on the Lucerne Festival model - named "Cappella Aquileia", thus remembering Heidenheim's Roman past. Being presented for the first time in 2011, the orchestra of the festival has become a focal point and at the same time an ambassador of the festival city of Heidenheim. The CDs of the orchestra immediately have received international attention and praise: Several recordings were nominated for the ICMA (International Classical Music Award), the 2018 “I Lombardi” live recorded CD appeared on the prestigious German Schallplattenkritik Prize long list. According to eminent German critic Eleonore Buening (Frankfurter Allgemeine Sonntagszeitung) who attended the Ernani performance in July 2019, the “Cappella Aquileia” has achieved “a true miracle” in creating great orchestral colors. Guest tours have taken the Orchestra of the Opera Festival to Switzerland, France and, in 2017, to Italy for the first time. In addition to the series with the early Verdi operas, Marcus Bosch and his orchestra have started two more recording series, with the orchestral works of Robert Schumann, and with the drama music and the works for violin and orchestra by Ludwig van Beethoven.

In 2013, the Stuttgart Philharmonic has become partner of Opernfestspiele Heidenheim as festival orchestra and contributes one opera production and several concerts every year. The collaboration with the Czech Philharmonic Choir of Brno has become exceptionally successful; audiences and critics alike have been stunned by the perfection, sound and acting skills of the singers. Also the partnership with Deutschlandradio Kultur and the Coviello Classics record label is a proof of the quality and ambition of the festival. Internationally acclaimed opera directors, singers and instrumental soloists attract more and more visitors from afar. And, very importantly so, both political deciders and sponsors from economy, private support and foundations, help immensely to ever again achieve the highest standards for the Opernfestspiele in artistic effort, management and communication.

Since 2010, the Heidenheim Opera Festival has been under the artistic direction of Marcus Bosch, professor for orchestra conducting in Munich and former music director of Staatstheater Nürnberg and Aachen theatre. International success and commitment in his hometown, where he was born in 1969 - the "Heidenheim Green Hill" is both a challenge and a source of strength for Bosch today. "For me, the Festival is the place where musicians and their audiences meet in a special atmosphere and in a spontaneity and directness that is often very difficult to create elsewhere. Artistically, the festival is incredibly productive for all of us". A happy situation: The city of Heidenheim and Marcus Bosch have prematurely extended the contract for the artistic direction of the Heidenheim Opera Festival until 2025.

Bosch's resume to date: since taking over the artistic direction, the festival's budget has tripled and its income has radically improved: while in the years prior to 2010 the festival was self-financed at around 35%, today around 60% of the funding for the opera festivals is self-financed, with 30% of the total budget coming from outside sources, well above the average for other festivals in Germany. Audience figures have more than doubled since 2009. The 2017 season recorded the highest number of visitors in the history of the festival with 18,500 guests and the third visitor record in a row.

According to a differentiated sponsoring concept, the festival works dynamically with around 30 companies in the region's strong economy, including the four main sponsors Voith GmbH, Zeiss AG, Paul Hartmann AG and Stadtwerke Heidenheim. In addition, patronage has also experienced a significant upswing. The Board of Trustees of the Opera Festival, which was founded in 2010 and is made up of top members of the East Württemberg business community, plays a special role in the acquisition process. The development of the exclusive "100 OHs" patrons' club, which Bosch founded in 2013, was also successful. A maximum of 100 members support the Opera Festival with an annual minimum of 1,000 euros per member. Recently, the 100th member was admitted to the club and a second club "55 Aquileias" was founded to support the Cappella Aquileia.

Commitment and success have persuaded the city committees to significantly increase the subsidies for the Opera Festival. As part of the "Festival City Development Concept" for the years 2014 to 2020, the City of Heidenheim, as the sponsor, is gradually doubling its subsidy (starting from the 2013 level) to 815,000 euros. An anti-cyclical measure and a unique situation in the German cultural landscape. In the 2014 season, the state of Baden-Württemberg also increased its festival funding in general and in Heidenheim disproportionately to 142,000 euros. The courageous collaboration of artistic directors, city leaders and business led to a six-fold increase in third-party funding from 2009 to 532,000 euros today. 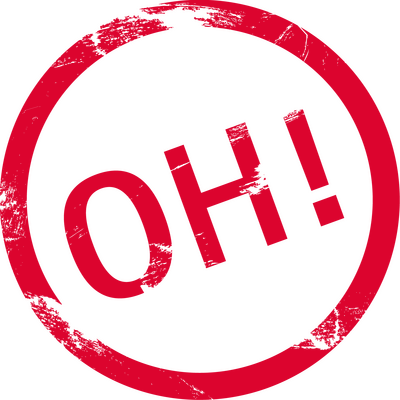