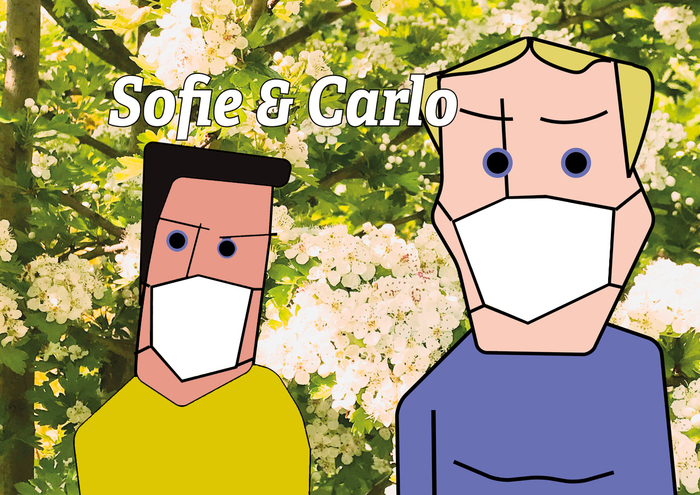 There were worse new arrangements in place at the festival a week after the Mayor had announced that half its money would be withdrawn. Not only was there no office to go to (true for everyone in virus months, of course), there were not the usual layers of management staff between the interns, Estonian Sofie and Italian Carlo, and the General Manager, Oxana. Already the Artistic Director had been told his services were 'in abeyance', as the President of the Board had put it as tactfully as he could.

Many of the rest of the staff, Oxana's deputy, the press office, marketing and the Sponsors' Experience Enhancement Manager (SEEM), had been told they were now GEESE (Government Entertainment Employees Surplus to Enterprise) and a basic income would be sent straight to their supermarket loyalty cards. The cackling was furious but futile.

That left Carlo and Sofie as the first ports of call for many of the endless enquiries coming in from all quarters: worried audience members, even more worried performers, directors of professional associations (of which the Festival Action Committee on Talent, FACT, was the most annoying), and just the usual quota of mad people demanding either money or to conduct the opening concert.

“I want you to deal with the public,” Oxana told Sofie, “you have the sympathetic touch – you also have the advantage of not speaking our language so you will not understand the stupid questions.”

“What about the questions that aren't stupid?” Sofie wondered aloud.

“There are none of those, in my experience,” Oxana dismissed the idea fiercely. “I will switch the public call number through to your phone.”

“Fine,” said Sofie, meaning the opposite and trying to remember if she had a spare SIM card hidden somewhere.

“So Carlo,” Oxana went on, “that means I want you to deal with the artists. You're Italian so you can lie so much better than Sofie or me.” It was an unwarranted slur on his entire nation but Carlo admitted that he was possibly more economical with the actuality on occasion than straight as a fence post Sofie.

His first test came late that afternoon. His phone trilled as he was taking a well-earned siesta in his Spring yellow shorts on the miniscule balcony, not much wider than an expanded window ledge, of his apartment.

“Si, Carlo sono,” Carlo managed to hoist himself onto one elbow.

“You have my wonderful Atlantic City Lady Flute Jugglers booked to open your festival parade in just nine weeks time, I see here.”

“Well,” Wymark was all bonhomie, “it'll be quite some spectacle, I can assure you. They are really something! Now, I just want to clear a little matter up with your Oxana while we're still in preparation mode.”

“You can speak to me. I have her full confidence,” Carlo assured him.

“That's as maybe, son. OK. These are my cards – out on the table. We may have a few transport allocation issues coming down the runway: augmented cost scenarios, costume curtailment requirements and the like.” The Senior VP of Stein Associates Inc. (stars procurement specialists since 1931) paused for a moment. “You still there, Carlo baby?” Carlo adjusted his sunbathing shorts and admitted he was. “So the dice fall like this. We will be passing those costs on down the line to you. What you do with them is your business. I'm emailing Oxana the extra page of the contract now. And a fine morning to you, baby.”

“She will be thrilled, I know,” Carlo purred, “I will inform her presently and no doubt she will take a considered view of your suggestion.” His diplomacy was wasted, though. The line to America was cut.

The 30th anniversary edition of Malta Festival Poznań focused on the festival's local dimension as the pandemic made it impossible to produce the planned international programme. However, they managed to organise a 'festival on tour' holding events in innovative settings such as rivers, by lakes, housing estates or fields.