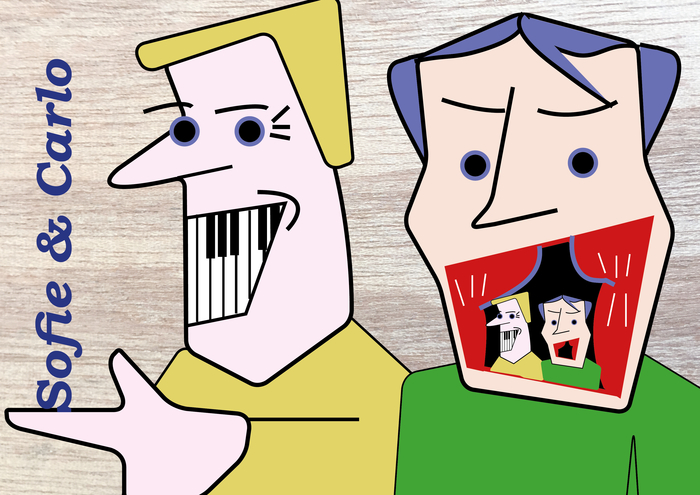 Sofie examined Carlo from top to bottom, or as much of the bottom as was not hidden by his desk, and then back up again. Only once her assessment was complete did she lean over from her side and offer a hand to shake.

Carlo looked up as she spoke and pretended to be surprised, a trifle confused. In fact he had completed his own assessment of her within a millisecond of her walking through the door but had no intention of admitting it. Tough, he had thought, noting the firm set of her jaw, the stern cut of the mouth; Northern and a bit stringy for his Southern taste but could be worse.

“Bon giorno,” he grasped her hand, smiling and half rising from his seat. “Carlo.”

“Sofie,” she announced, completing her judgement of Carlo. Typical Italian; silly black hair, worn a bit too long for these days, stupidly expensive black t-shirt. It was just a black t-shirt for heavens sake! He probably smoked, she decided on no evidence, and would show off by being really patronising.

There was no need for instant small talk. Sofie opened the lid of her standard issue festival laptop and switched on. Once the prompt came up she typed in the password she'd been given. Could have come up with something more original and secure than Sofie1, she thought. No secrets here, then.

“Have you met the Director yet?” asked Carlo cheerfully.

Sofie shrugged, waited for a browser to load. “No, only the...”

“Fierce? She was very nice to me.”

“Three days,” Carlo announced as if it was a record endurance test.

“I know. Amazing,” he preened.

“What is?” enquired a voice behind him.

Carlo turned and smiled up at the squat figure with heavy jewellery and hair an industrial shade of bronzed orange. “That Sofie is here, I have a partner now,” he lied fluently.

Oxana sniffed. “Before you are too overcome, Carlo, you can take her over to the hall.”

“In a way. We have a situation developing.” Both her interns looked up expectantly, looking forward to a taste of orchestral management, sorting out a fight between the double-bass players, hunting for the conductor's lost score of a great Mahler symphony. Their hopes soon faded. “Some mother has dropped her little beasts off for the Classical Darlings concert,”

“But that's tomorrow,” Carlo pointed out.

Oxana patted his shoulder. “Precisely. You know that, I know that, but the mother did not. You have a six and an eight year old – boy and girl in that order – to entertain for the next four hours. By the end of that you should know each other very well.” She swept out, calling, “off you go,” over her shoulder

The 30th anniversary edition of Malta Festival Poznań focused on the festival's local dimension as the pandemic made it impossible to produce the planned international programme. However, they managed to organise a 'festival on tour' holding events in innovative settings such as rivers, by lakes, housing estates or fields.