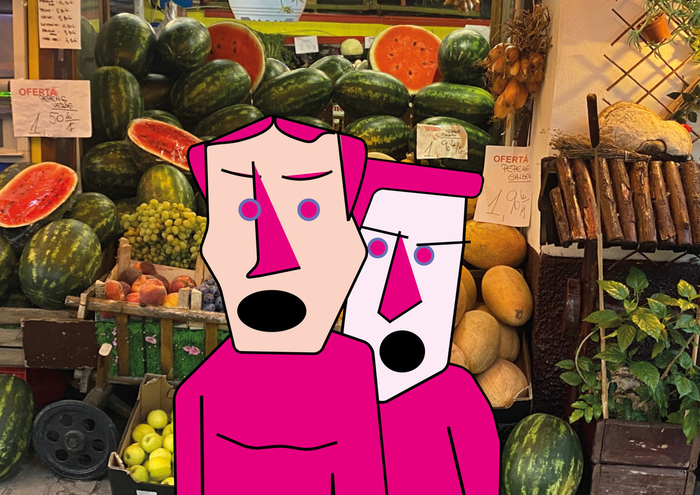 "Do you think we should do something?" Carlo asked Sofie at the side of the stage.

"I suppose so - what?" she shouted above the noise. "Is this artistic dissent or a riot," she shouted again as an open can of beer just missed her - at least she assumed it was beer.

At the front of the stage, AD (Achile Djurekschyk, the outgoing Artistic Director) stood hand in hand with composer, cast and production team, doing their best to smile through the hail of small missiles and the chorus of boos, as if flowers were being thrown and the demands were for encores. The composer was Pimpelbaum and he was relishing every moment of the fuss over the final performance of his grand and grotesque opera, Waldo The Necromancer. As a half-eaten apple thudded against his shoulder, his grin widened in delight. "Stravinsky was just a prelude. This is so much better than The Rite of Spring. We are commemorating fifty years since he died and the 108th anniversary of the premiere in the best way possible - by infuriating the bourgeoisie."

This was not quite how AD saw it. "Ouch!" he replied as an iceberg lettuce bounced off his midriff. He was a sensitive soul and this was meant to be his great moment on stage at the end of the festival he had led for half a decade: the culmination of his patronage of contemporary art. He knew that new was always difficult to sell but even he was aware that Pimpelbaum's efforts were deliberately provocative.

Even then, AD understood his festival audience well enough to know that they would have forgiven the silly story, the pretentious staging, the revolting costumes, if the music had been good. It was not. It was dull, repetitive, grating and pointlessly difficult to sing.

"Maybe I should just kill the lights," Carlo ventured.

"You could but will that be enough. And how do we get them," Sofie waved at the embattled cast, "out of here?"

"They seem to have their own ideas about that," noted Carlo as the singers began to desert the production team and leave the stage with undignified haste. The orchestra, keen to protect their instruments and not in the least caring about Pimpelbaum after the agonies he had put them through, were long gone.

"Shall I?" asked Carlo again.

"Go on," said Sofie but then held him back as the whole scene changed instantly and dramatically.

AD had had enough of being pelted with vegetables for the composer's incompetence. In possibly the most decisive act of his life, he caught a flying egg with one hand, a tomato with the other, and smashed them both over Pimpelbaum's head, then wiped his hands slowly down Pimpelbaum's jacket. The derision turned to delight. AD went from zero to hero with one gesture.

Fierce Oxana, watching from the back of the crowd, wondered what the penalties were for justified assault; making a festive omelette on a tiresome Pimpelbaum.