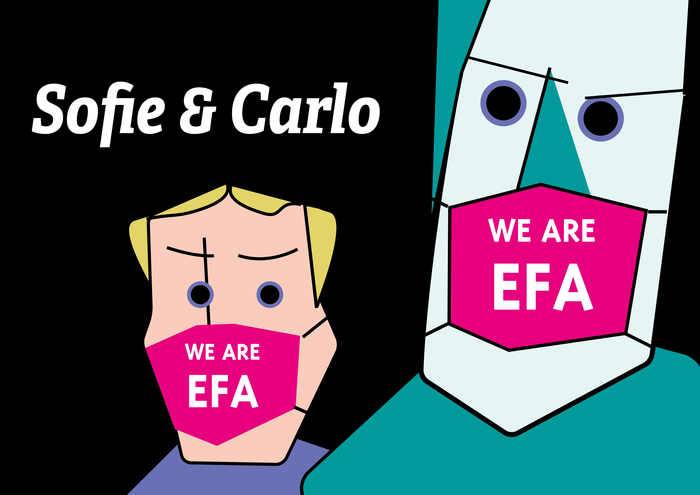 Much to everybody's surprise the opening night of the new festival seemed to have gone rather well. The fireworks had fired without setting the ancient palace or even Carlo ablaze. In the amphitheatre outside the centre of town all the tape he had stuck down in the heat of the day had generally kept apart the audience watching the big screens and the accompanying live but well spread out dancers. The brass and percussion ensemble had fanfared and thundered behind perspex screens to fine effect. The audience had queued appropriately for beer and wine handed down in plastic glasses and most had obeyed the instructions to chuck them in bins provided afterwards and not on the ground. Even General Manager Oxana smiled and forgot to be fierce with her staff as the lights were switched off and they trudged home close to midnight.

AD, the tired Artistic Director, bowed gracefully to Sofie when he walked by. “I think we did OK,” he grinned.

“So all your worries had no foundations.”

“Foundations, yes, but luckily nothing built on them. There's always tomorrow, though.”

“And there's always tomorrow's success,” Sofie reassured him. AD sighed and plodded off into the night. Sofie followed soon after, and was glad to find her bed. Nothing, not even the incessant noise through the wall of her Spanish flatmate talking into the phone, was going to keep her awake.

The next morning came far too quickly and Sofie began to remember what the festival routine was really like: late to bed, early to rise, food grabbed on the run and eaten without stopping, endless text messages demanding even more instant action. She lay in bed for a moment wishing the light would go away and the birds stop sounding so sure of themselves. She checked the time on her phone for the third time, stabbed open the message file and groaned.

Three unread messages; the first from Oxana. “Expect you at office 8.30 sharp,” it read. The second one was also from Oxana. “Cancel that. Make it at 8.”

The third one was at least more expansive but it was from Carlo, only sent five minutes earlier. That must have been the one that woke her up. “Cara,” it began, “I think Ox spit blood. Something cancelled Not our fault She don't care.”

Sofie was impressed with herself that she had managed to wake up (almost), shower, dress, pass her favourite café to get a decent carry-out coffee and still be in the office at 8.07. Better still, despite the fierce summons, Oxana only came in a minute later, making it look as if Sofie had been waiting for ages. And best of all, Carlo did not make it until 8.11, so drawing the full weight of Oxana's sarcasm and disgust. Sofie found it hard not to smirk. Carlo took one look at her and wondered what he wanted to throw at her most – a chair or boiling oil.

“So what is the crisis?” Carlo asked once Oxana had stopped berating him.

“******** children's entertainers again!” announced Oxana with too many expletives, luckily in a language neither Carlo nor Sofie understood.

“Let me guess. They've cancelled and the show is in the amphitheatre at 11?” Carlo suggested.

“And you want us to stand at the entrance and break the news to all the little darlings.”

Sofie could tell what was coming and decided to stop the idea before it started. “I will not be a stage horse,” she said firmly, “either end.”

“No”, agreed Oxana, “but you can both take the roles you know best. A pair of clowns.” She slammed her office door before the protests could erupt.