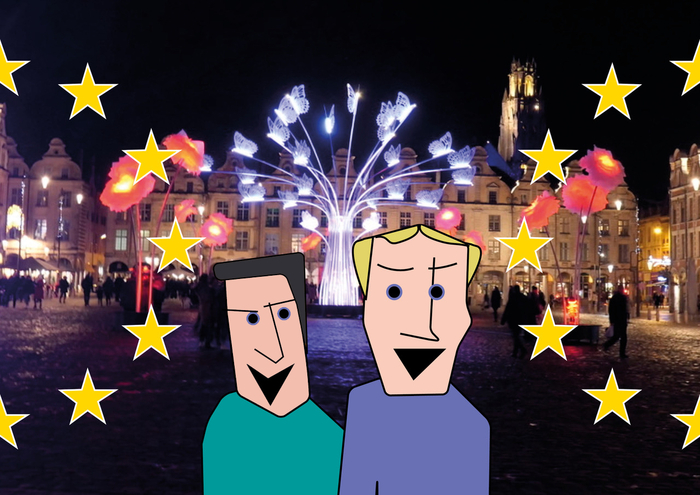 Sofie sat in the draughty wooden hut that was usually occupied by the car park attendant at the city's opera house but was now erected inside a gateway to a field at the edge of the town, leading down to the river. The rain was falling with relentless energy – one of those summer drenchings that happen after a hot dry day. It was turning the field fast into a muddy bog.

Sofie was cold but not actually wet, except for her feet. She was fast coming to the conclusion as certain as the rain that tonight's festival performance might have seemed a good idea at the time (about fifteen months ago) but it was a very bad one now.

The scene on which she looked was a mess in every sense. Somewhere in the distance two increasingly desperate singers were trying to hear their orchestral cues as their make-up turned to sludge and their costumes wilted.

This is how the sorry spectacle had unfolded. All those months ago the Artistic Director had thought how solemn and pertinent it would be to react to the MeToo movement by staging Bartok's Bluebeard's Castle as the ultimate warning against getting mixed up with conniving powerful men (his own recent break-up being a touch raw still). He had recruited a particularly doom-laden production from Bad Sodersheim's theatre that featured a gnarled Bluebeard and an ardently innocent Judith. It was to play before the run of his commissioned opera, rescheduled from the previous season after composer problems, Pimplebaum's Waldo The Necromancer.

Of course, both should have taken place indoors. Then came COVID.

Bluebeard had his castle newly built in a riverside setting, handy for a quick getaway by water. It was not exactly a stone edifice, sadly: merely a scaffolding stage usually used for rock concerts. Rather than disturb the peace with big loudspeakers, AD had cleverly arranged for the opera to be broadcast simultaneously on radio, so that the audience could park their cars in the field and listen while they watched through their windscreens, safe inside their automobile bubble. Brilliant.

Towards nightfall the cars began to gather and Sofie scanned their tickets from behind the window of her hutch before passing the drivers on to Carlo's small cohort of helpers, who guided them to their vantage point. The field sloped in a way not much different from a raked concert hall, so sightlines were not a problem.

Then the rain came.

At the moment in the opera when Bluebeard revealed the lake of tears behind his sixth door, the projected scene became indistinguishable from the field where the audience was parked: a swamp, a hill of treacherous mud. The view of the stage was only possible between increasingly rapid sweeps of windscreen wipers.

The reception on car radios began to crackle and buzz. At first people thought there must be a thunderstorm coming - one hysteric even suspected aliens, another thought Bluebeard's ghost was having his revenge, changing round the meaning of MeToo – but then the music faded out and an announcer came on air. “We apologise for the sound quality. Unfortunately water and microphones do not mix well together.”

The music never returned. As Bluebeard - now sodden and catching a cold that would keep him from the stage for a month - sang his final notes, only the stagehands heard him. He was drowned out by the sound of engines revving as car wheels buried themselves in mud.

Inside her hut Sofie sighed and watched as the cavalry arrived: Carlo driving a tractor to tow the audience to firm roads home.